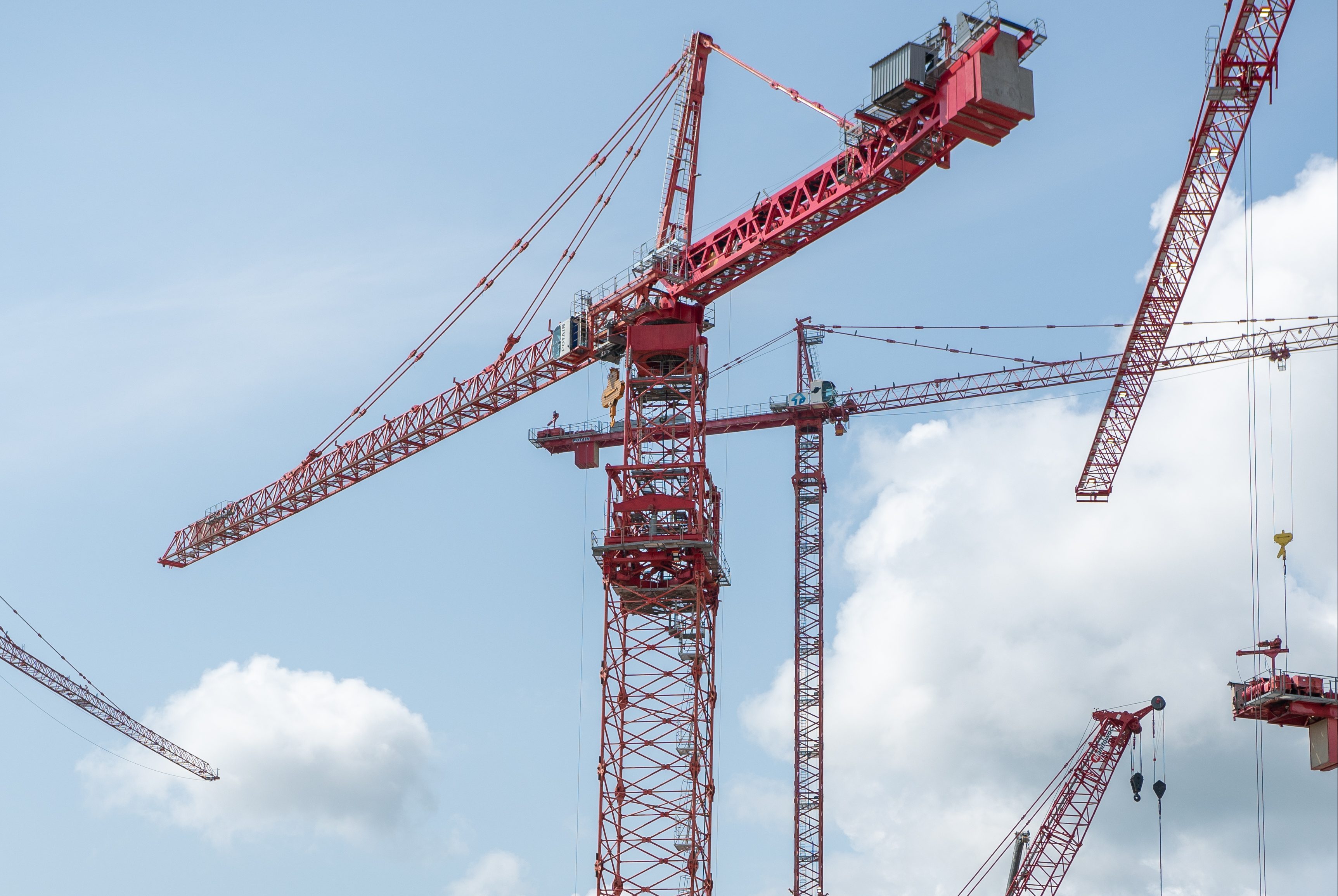 What is the largest Potain travelling crane ever to be used in North America called? Well, that depends on who you ask.

AFDE acquired a Potain MD3200 crane for the project. This is the largest Potain Travelling Crane to ever be used in North America, and it is only one of four in the word. This crane was originally built in 2007 to construct the EPR Nuclear Power Plant in Flamanville, France.

The crane was reconditioned to AFDE’s specifications, which took one year. It was delivered from France in 52 custom containers via five ships. The parts were then transported to site during the winter and spring of 2019. “There was three to four feet of snow to deal with,” recalls Crane Foreman Jeff Klassen. “We were the first ones to assemble a 3200 in the Americas.”

The crane was positioned on a custom rail track in the Powerhouse area. It can travel at 17 metres per minute, up to 107 metres (the distance of the rail track). 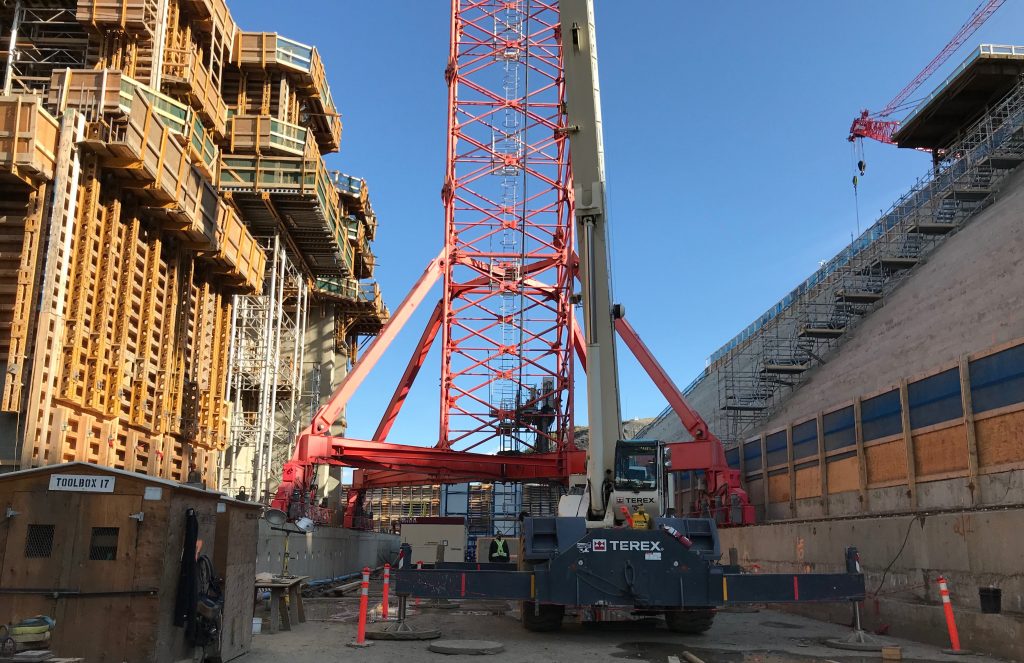 Speaking of when he first saw the crane fully assembled, Crane Operator Greg Hayes says: “I felt excited… and I could hardly wait to operate it.”

The MD3200 weighs a staggering 670,000 kg (1.48 million lbs). That’s slightly more than the weight of the Christ the Redeemer statue towering over Rio de Janeiro, Brazil; ½ of a giant Sierra Redwood tree; 6.5 blue wales; or 100 elephants.

“It’s outstanding, it’s definitely part of the skyline. When you’re driving into the site or into the job, if you don’t know how big it really is from the horizon, it’s massive,” says Nathan Johnson, Deputy Intakes & Penstocks Manager. 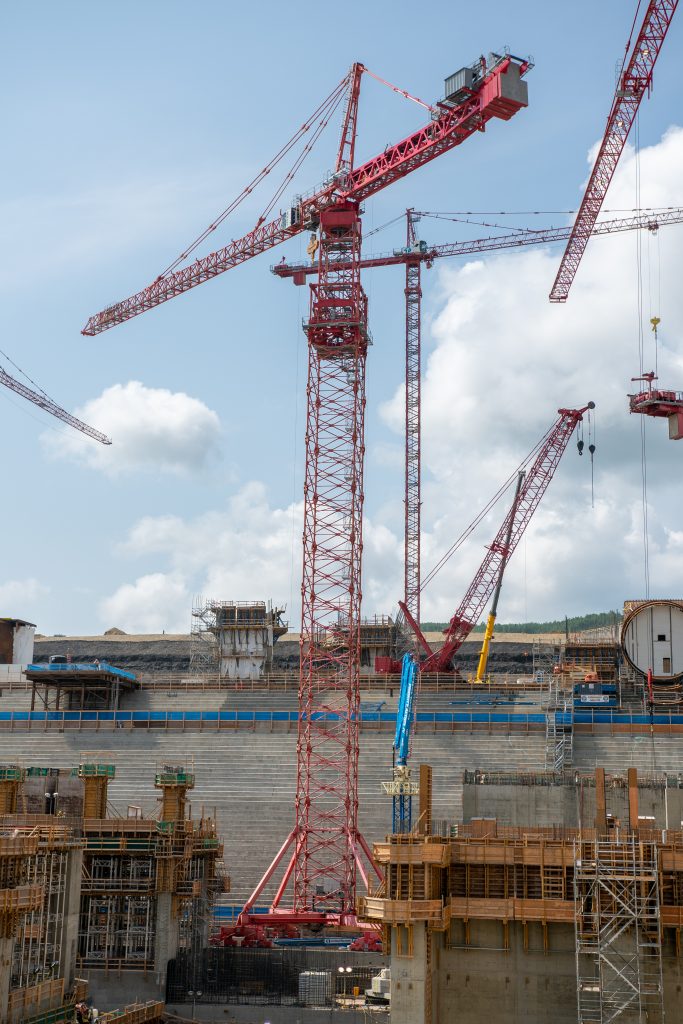 The crane is affectionately named Sir Pix-a-Lot by the Intakes & Penstocks team, not the crane operators crew. “It’s the 3200,” says Jeff Klassen. “At the end of day, the crane is piece of equipment built for a purpose.” Around the administrative offices on site, it’s simply referred to as TC3 (tower crane three).

Whatever the name, the crane can indeed, pick up a lot. It can lift up to eight times more than any other tower crane on site. Its main job is lifting large penstock sections into place, many of which weigh over 100,000 lbs. “It’s tool number one…it’s definitely the lifeline and the number one piece of equipment needed just to install all the pieces,” says Nathan Johnson.

“The ability to put these penstocks in, the engineering to get these things in line and move them around has always been a problem on these larger projects,” says Greg Hayes, who has operated cranes on two other dam projects before coming to Site C. “Whatever the engineers ask for this thing can do it with ease, it’s an easy crane to operate.” 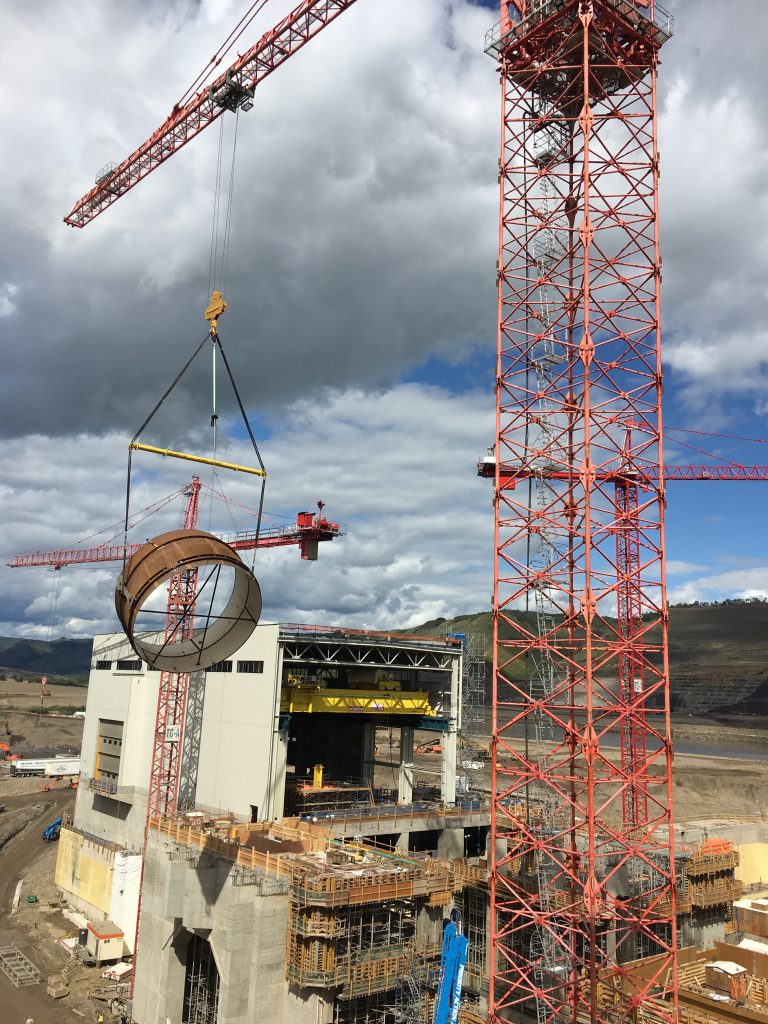 “So far I’ve picked up 126,000 lbs, and you couldn’t even feel it, you couldn’t even tell you were picking it up, which is amazing for a crane, especially a tower crane,” says Greg Hayes. “We’re not going to get another chance to run a crane like this. This is very, very rare.”

Watch the crane in action below as it picks up and places a section of penstock into place.